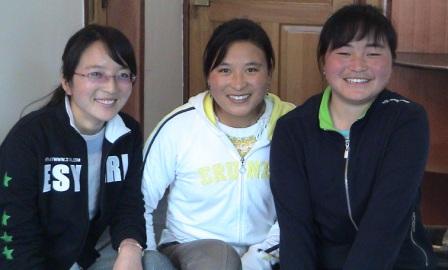 Mama’s Wish Education Site Visit
April 26th
I was the only person on the plane today without black hair and black eyes. That was an interesting observation. I was acutely aware of how different I was from everyone else. It makes me wonder how our children feel, surrounded by light hair and light eyes. The flight lasted just over an hour, and before I was really awake this morning we had arrived in Xining. 8:30 a.m. As the plane began to descend, I surveyed the landscape and it wasn’t at all what I had expected. I thought we were landing on the moon. This is a barren land, lacking vegetation of almost any sort. It reminded me of Xinjiang Province, where Jacob is from. There is a stark beauty in the contrast of the rolling hills and the sharp jags of the rocks. 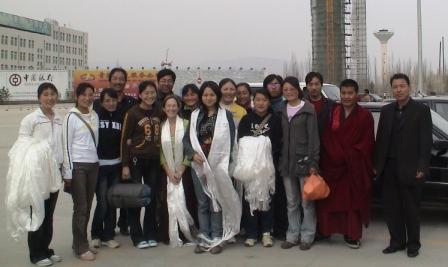 Our morning started with the most wonderful surprise. We had expected to be met at the airport by one of the Mama’s Wish teachers. Instead, we were greeted by all five founding teachers of the Mama’s Wish program; accompanying them were eleven of the local college students! I was so excited as I looked into the distance and recognized so many beautiful faces. As we joined them, each student came greeted us by placing a hada around our necks. A “hada” is a Tibetan prayer shawl, and it is their traditional way to greet someone. By the time each student had done this we were covered in beautiful white prayer shawls. Each student spoke to me in English, “Hello. Nice to see you!” I could not believe how well they were able to speak English. These students are nothing short of brilliant. Everyone followed us to the hotel, where Nicole and I checked into the Deluxe Suite for 120RMB per night (that’s less than $15). The room was nicer than I had expected, and there was a nice sitting area where we all crowded in to get to know one another. 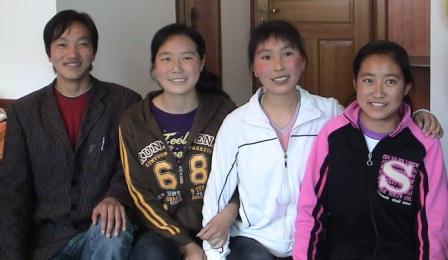 The teachers introduced themselves, and explained their role in Mama’s Wish. It is interesting to talk to a group of people who speak three different languages. The students took turns introducing themselves to us, giving us their names, their majors, and telling us a little about their families and their hobbies – all in English. Nicole and I were both stunned to hear just how well they could speak and understand English. They have been working very hard to learn the language. They talked about college life – sometimes all at once – and we heard so many interesting stories about how they had adjusted to living in a city, how they overcame homesickness by concentrating on their studies, and how they had all supported one another while being so far away from home. Time flew by quickly as we learned about one another and enjoyed many laughs. The students were having a reunion of sorts, because they don’t all go to the same university so some hadn’t seen each other in several months. There are a few students who go to university in Lanzhou, and I knew that my schedule would not allow enough time for me to visit them. I was overjoyed to see them in the group. They had taken the bus from Lanzhou to Xining the day before, and they were there with the other students to greet us. 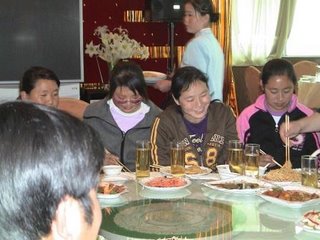 We invited them out to lunch with us, and had the most amazing meal at a restaurant near the hotel. All 19 of us crowded around one large table meant to seat 10 people. We didn’t want two tables so we made room for everyone at one table. We were all quite cozy! As always in China, there was quite a feast. We had lots of noodles and vegetables, two kinds of soup, and a few beef dishes that tasted better than just about any meal I’ve had in China so far. Some of the beef dishes were local specialties. I wish I could have the recipe for everything we had at lunch. The tea was also the best I’ve ever had. Everyone laughed and talked and had a great time. The students were so glad to see one another, and also to see their beloved teachers again. They thanked Nicole and I so many times for helping them to go to college. It was an undeserved thanks, I assured them. All of the thanks should go to their teachers – who taught them so well and encouraged them not to give up but to study hard and stay in school – and to their sponsors – without whose generosity none of this would be possible. I accepted their warms thanks on behalf of the sponsors, and promised to pass it on. During lunch we were treated by some of the students representing their villages by singing a song from their home town. They all have such beautiful, pure voices, and I was told that the children from this region begin singing as soon as they are born and begin dancing as soon as they can walk. Some students are from remote mountain villages, and their songs were different from the students who are from the remote grasslands and valleys. Finally the students convinced one of their teachers to sing a song in order to represent the area where some of the teachers are from. The meal ended by all of the students getting up and demonstrating local dances from their villages. 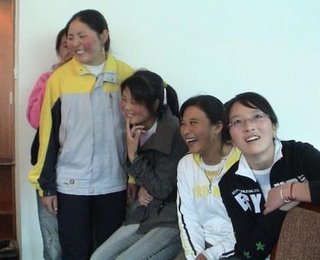 I can’t remember the last time I had this much fun! The students returned to school after lunch, and a couple of hours later we joined them at one of the universities in Xining. We met two of the students’ professors, who told us how proud they are of the students and how hard they are working. One girl, who is majoring in English and Tibetan, is the number one student in her department at the university. Another girl, majoring in computer science, is the number six student in her department. The news of this struck me again at just how hard these young men and women are working and just how far they have come already. I cannot begin to imagine moving far away to a place so foreign to me, studying in a university where I am not very familiar with the language (classes are taught in Mandarin and their first language is Tibetan). That alone is quite a daunting task. But then to finish the first semester at number one, or number six…what an amazing feat! The professors were very pleased with progress of all of the students at the university. They told us that our students study very long hours, that they are always on time for class, and that none of them has ever missed a day of class. We were also happy to learn that they have an American teacher in the English Department at this university. I believe that this professor is doing a great job in helping the students learn the language, and I would have loved to have met him. 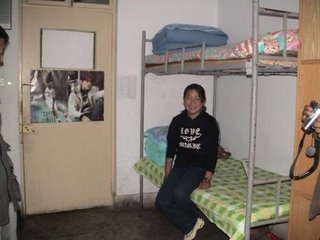 The professors then went with us to visit the dorm rooms of some of the students. Six students sleep in each room. The accommodations are simple, but the students were very eager to show off their rooms to us. While sparten, the students showed them off with pride and joy. Their faces beamed as they showed us their beds, their books, their desks, etc. These students have such strong and pure spirits. They laugh so much, and they are so very sweet. I would be proud to call any one of them my child. The sponsors have provided them with everything they need to make it as a college student. Tuition, room and board, books, tutors for some, food, clothes, and love and support. The more I learn about the Mama’s Wish program, the more I am impressed by it. I am so thankful that we learned about these devoted teachers and their dedicated students. I was sorry to leave the students. We had so much fun with them, and it was an incredible first day of my trip. I can’t imagine how any day could top this one, but I still have many students to visit so anything is possible.
Angela Taylor/ Mama’s Wish Coordinator