It snowed last night in Xining. I was grateful for our heavy down comforters, because there is no heat in the hotel and my nose was quite chilly when I woke up this morning. I took my shower, with no shower curtain, and by the time I finished the bathroom looked like our bathroom at home after the kids all take a shower together. :o)

Mr. Cuo, one of the Mama’s Wish teachers, picked us up and drove us to a university located 2.5 hours from here, where five students are attending the Teachers College. It was a bright, beautiful, sunny day, and the snow on the mountains in the distance was dazzling.

About half-way through the trip we saw that someone had had a minor wreck in their car. Thankfully, the man wasn’t injured, and we picked him up and took him to the next village where he could call for help. The man was Uyghur, and spoke only the local dialect. I had so many questions that I wanted to ask him, but none of us could understand each other so we just smiled and nodded at one another as the kilometers passed.

When we arrived at the University the five students were waiting for us at the gate. They had been standing out in the cold for over an hour waiting for us to get there because they were so excited to have visitors. Once again, they greeted us with the hadas, and then we went inside to meet with their professors. One professor is teaching three students who are studying to teach science, and the other professor is teaching the three students who are studying to teach literature. They were both very kind and humble men who thanked us for giving these students an opportunity that they otherwise would not have. They reported that the students all study very hard, and they have hopes that two students in particular will be able to go on and study at higher levels in the future because they are very gifted students, whose scores are at the same level as the best students in the larger cities such as Beijing and Shanghai, who have had the opportunity to have been educated in expensive, private high schools. 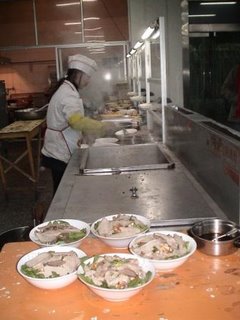 From here, we decided to take a break and go to lunch. Lunch was so much fun. The students talked about their experience at college, and they were very serious when they discussed their studies. After lunch, I gave them their sponsor letters and Nicole translated for them. More than one student began to cry when Nicole read the letters. I videotaped the students sending a message to their sponsors, and one of the girls began crying when Nicole asked her why she wanted to become a teacher. She tried to compose herself for several minutes and I told her she did not have to do this, but she insisted that she wanted to continue. We learned that her father, a teacher, had been killed in a car accident one year ago and she wanted more than anything to be able to continue teaching the children that he once taught. It was so sad – in her village the tradition is that when a husband dies, the wife cannot wash her hair or leave the home for one year. So in the months after her father died, they had absolutely no income and no way to earn money. Although she knew that she had passed the national exam and had been accepted to college, she also knew that there was no way that she could go. It was during this time that the Mama’s Wish teachers visited her home and told her not to give up. They insisted that she continue her studies and they promised to do everything they could to help find a sponsor for her. Now she is the number one student in her department at school, and she still cannot believe how her life has changed. By the time she finished, Nicole and I were both crying. 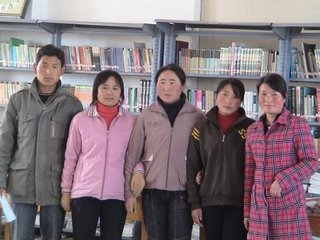 Each of these students has a story that would make you cry. Each one is so very special, and such an inspiration. I wish someone would make a documentary about these young men and women, and show it in all of the high schools in America. There is so much that we can learn from them, about the value of education, the value of hard work, determination, and sheer will to never give up on your dream no matter what obstacles are thrown in your path. 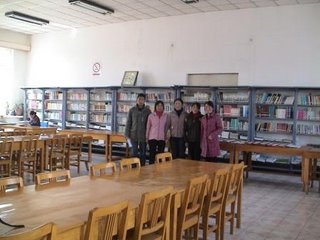 We returned to the college with the students and they proudly showed us their school library. They were all amazed when they first arrived at school to see so many books. I was again moved by this, because this small teachers’ college has about the same number of books in its library as I have in my personal library at home – but to these kids, it was a wonderful blessing to have so many books at their disposal.

Another student wanted to show us her classroom, which was empty at the time. Nicole suggested that I teach them an English word, so I taught them the meaning of Love Without Boundaries. I got to play teacher, at the front of the class with my five students, and they learned how the foundation got its name and what its name means.

When it was finally time to go, we had a difficult time saying goodbye. I know that it will be a long time before I can see them again, and I know that so much will change in their lives in that time.

Less than ten minutes after we left the students, the beautiful blue sky began to turn gray and before long it began snowing – a horizontal snow, pushed by the high winds. I knew this would be a fun trip home. We had hoped to have time to go to Qinghai Lake on the way home, because it is only 15 km out of the way from the road we were traveling. By the time we got to the lake, though, the wind was so high and the snow was falling so hard that we decided we shouldn’t get out of the car, but instead turn around and head back to Qinghai. So, we were able to see the huge lake from the car but didn’t really get to enjoy it much.

Our next excitement is that we were very nearly run off the road by a yak. The visibility was not very good when the snow was falling so heavily, and a yak decided to cross the road at the very moment our car was approaching him. Yaks look big when they’re four inches from your car window! :o)

And speaking of yaks… is a yak really just a cow with long hair? Nicole insisted that it was after she called a yak “beef.” I said that “beef” is cow, and she said that a yak is just a cow with long hair. This all happened after I learned that the delicious meal that I ate yesterday – the one with beef dishes that I wish I had the recipe for – was yak meat. Hmmm…I would’ve never tried it if she had told me it was yak, but since she called it beef I ate it, and I loved it. Now she’s trying to get me to taste Yak jerky, but I’m not so sure. It probably tastes delicious, but I’m not sure if I really want to eat a yak. 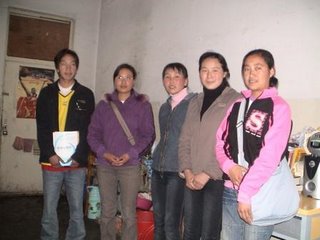 We stopped at the medical university, where we have five students attending Tibetan Medicine School there. We saw their cafeteria, and now I know why all of the students have gained weight. Every day they have over 100 menu choices, and the food looked and smelled delicious. The cafeteria worker saw us there and wondered why we were in his cafeteria, so came over to talk to us. Nicole explained who we were and what we were doing here and he thanked us for helping these students have a chance at attending university.

We then went to the teachers’ dormitory to visit one of the professors, but he wasn’t in so another professor invited us into his room and served hot water to us. He said that although he is not the teacher of these students, he does see them quite often and the thing that he notices about these five is that they study longer hours than most other students, AND that they particularly study English very hard, which is rare in the Tibetan medical college. He is quite impressed with each student, and knows that they will do well in the future.

We asked each student what their ultimate goal was. One wants to continue to study Tibetan medicine and get her master’s degree. Another wants to do the same thing, but study western medicine and Tibetan medicine at the master’s level. The third student would also love to attend graduate school, and use the chemistry in western medicine along with traditional Tibetan medicine in order to improve his treatment of patients. And one girl, who began to cry, said that she has three wishes: One is to attend graduate school in western and Tibetan medicine; two is to be able to study medicine overseas, so that she can learn as much as possible about western medicine; and three is to return to her home village to open a clinic for poor people, and treat those who cannot afford to travel long distances. She cried as she explained that this semester she learned that the disease that had killed her mother was completely curable, but they did not have the money to send her to a doctor and so she died. She is very sad that her mother’s death could have been prevented, and she could have been cured of her illness. She does not want any other child to lose a parent to a disease which can be cured, and she wants to make sure that children in her home village do not have to go through what she has had to go through.

Once again, Nicole and I were in tears.

At the end of another long but wonderful day, we said goodbye to the students and returned to our hotel. Nicole’s husband and his mother are joining us tomorrow, and will be accompanying us to TongRen to visit the high school students, and then to Yushu to visit the WenLe Orphan School and the Karnang Village School. 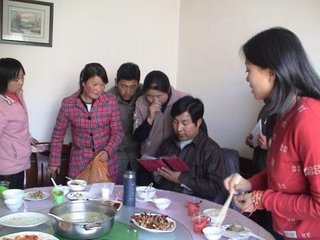 Tomorrow we will meet with the college students one last time, to go over some paperwork for the reports that I will be doing. Two students are majoring in English and Tibetan, and their English is so good that they are going to help translate the sponsor letters for the high school students. In return, to pay for their services, we are going to buy them an electronic device that will help them with English pronunciation. They are very excited to do this, and we are happy to find a way for them to feel like they are earning this, rather than us giving them something out of charity.

Once all of this is done, it will be time to say goodbye to the students and to Xining, because we leave for TongRen tomorrow morning.