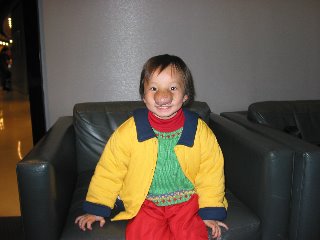 There are times that I get so overwhelmed by the generosity of people and today was one of those days.

We have been so worried about Ms. Xu and Gong Lu – on the LONG plane ride, because Gong Lu get’s carsick (how would she handle the plane ride), not speaking the language and having to navigate customs, and because Ms. Xu has never flown on any airplane ever before. She was so nervous about this trip and what would happen – she was worried about the bathrooms on the plane, about customs, and about the food. I can only imagine what this trip, out of the safety of her town, would be like. 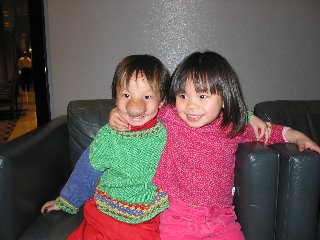 We have had some VERY kind souls who have helped to make Ms. Xu’s trip a trip to remember forever. First, it all starts with the travel department at a company named Autodesk. This company has spent hours making reservations for their travel – in addition to pooling their money to buy one of the international tickets. They also arranged for security passes for at least one person to accompany them to their AA gate (but put a request in for the whole group that was greeting them) and tried to get an escort to walk them through customs. Just last night, we found out that the escort wasn’t going to work, because the escort service is meant for small children traveling alone.

When we found out there would possibly be no one to escort them in Chicago, Lisa, the foster mother in Little Rock, started making some phone calls. She has a friend who is in the security department at the Little Rock airport. There are some great connections between the Little Rock airport and the Chicago airport, because this afternoon, Lisa’s friend had confirmed that there would be a bilingual person accompanying them all the way through customs. In addition, because of thunderstorms in Little Rock this evening, Lisa’s friend was continually updating them on the weather conditions, just in case their flight was diverted (which we also started thinking of contingency plans for every city they could possibly land at if they were diverted :). 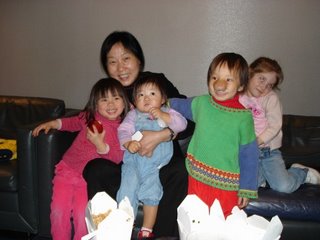 Back to Chicago, the greeters starting gathering. Earlier this afternoon, a mom, Patricia, of a little girl who was just adopted from Gong Lu’s orphanage last summer, drove from Milwaukee to Chicago (with her 18 month old). This drive is an hour and a half one way. As she left, she knew there was a possibility, because the flight was 2 hours late, that she might only see Ms. Xu and Gong Lu for a few minutes. That didn’t seem to bother her; she just wanted to see them!

Michael, a father of another little girl from Gong Lu’s orphanage arrived at the airport an hour before the flight arrived, just in case it got in early, he wanted to be prepared. The security at the airport allowed him through the first layer of security, not all the way back to the customs area, but right outside. He was able to greet Ms. Xu and Gong Lu as soon as they cleared customs. Michael said it was so cute, because Gong Lu came out holding their escort’s hand. The escort noticed that their bags should have been rechecked and instead of making them do it, took the bags and told them that she would walk them over to American Airlines for them. Michael said they both seemed very relaxed and bright-eyed – remarkable after that long flight and jet-lag.

In the meantime, Michael’s wife, Diane, their two girls, and Patricia and her little girl, went to a nearby Chinese restaurant for a quick dinner. While there were there, they grabbed some take-out (something s 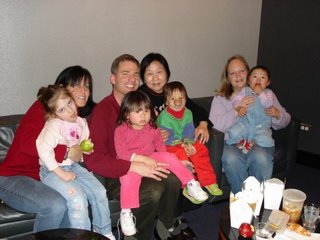 picy, because they knew that Ms. Xu loved spicy food) and also took with them someone who agreed to help translate (Michael had arranged this the day before). This second group made it to the airport just in time as Michael, Gong Lu, and Ms. Xu came out of the International terminal.

They then traveled over the collect the boarding passes and the security passes at the American Airlines desk. At this point, they thought that only two people (Michael and the translator) would be able to go on. Amazingly, ALL 7 PEOPLE were allowed through security – not only that — they were escorted to the Admiral’s Club!!! There they took pictures, ate the food the group brought and sat and visited. Patricia had brought an international calling card with her, so Ms. Xu could call home and let everyone know she was safe and sound.

Michael told me that Gong Lu just charmed the socks off of everyone. She has such a fun outgoing personality. How fun for him to be able to see this little girl that he first saw 2 ½ years ago when she was an inquisitive toddler. He told me that he vividly remembers this little girl – she was so curious and bright.

Not long after they had a chance to rest and relax, their flight was called to board. American Airlines personal came and escorted them on the plane first! So as I write, they are probably above Missouri somewhere, soon to land in the new home for a month, Little Rock. At the Little Rock airport, they will be greeted by their new foster family – Lisa and Jim, and friend of theirs through the local FCC – Jamie, and a translator. They have made a sign and have balloons ready to meet them. The also got security passes to meet them at the gate. After this quiet meeting, they will meet the television crew from the Today show who will be there to film their arrival. 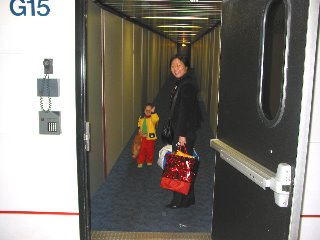 Michael and his wife took some pictures at the airport that I will be soon sending out – what a night!

I can’t even begin to think of all the wonderful people that made this flow so smoothly and made this a day to remember for Gong Lu and Ms. Xu. As I thought of each and everyone one of these people I was overwhelmed by SO much kindness.

Every one of these people deserves a HUGE THANK YOU for reaching out and touching this little girl and making a difference in her life!!!