Their plane landed 30 minutes late, due to a missing flight attendant in Chicago. I do have to mention one very special person in this whole story yesterday and his name is Ron. He is the Deputy Director at the airport in Little Rock. It was because of him that everythin 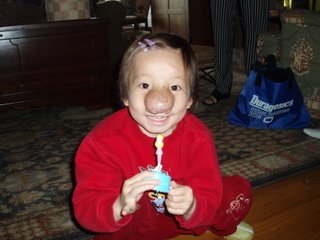 g went so smoothly in Chicago and also last night in Little Rock. He was another of yesterday’s heroes! Ron, along with the host family, Lisa and Jim, their friend Jamie, and Vivian, a translator, were all waiting for them as they came off the plane. Not only was this group waiting for them, but because so many people from the airport and American Airlines were involved, they ended up with quite a welcoming group waiting for them. Soon after this greeting, they were met by the TV crews from the Today show and Tom, from Arkansas Children’s hospital – what a wonderful welcome them had!!

Gong Lu and Ms. Xu were greeted with signs and balloons. Gong Lu LOVED the balloons and had so much fun playing with them. One of my favorite parts of last night’s story was at the end of the night, as they were all getting ready to leave, Gong Lu handed the balloons back to the person who had given them to her. She thanked them very much for letting her play with them. This sweet little girl didn’t realize that these were a present to her. When she learned that she could keep the balloons, she wanted to save a balloon for each of the three host family children. What a kind and giving little girl she is!

In addition, I think that Gong Lu has a calling in TV. She was not at all fazed by the cameras and just went on charming everyone. When asked what she most wanted to do in America, she said “Find a really good place to play!” I am sure that can be arranged!

Gong Lu continued to chat with everyone asking lots of questions – she is a very inquisitive child! She is very curious about her surgery and seems to understand that something big is soon going to happen. As they loaded her into the car to take her home, Gong Lu informed Lisa that she gets carsick J. Luckily, they had a smooth ride and no incidents!

After a bowl of congee, it was off to bed for Gong Lu. They are currently still asleep, but lunch will soon be delivered by a Chinese family. Lisa told me she was going to start making some noise so they can try to adjust to the change in time. After lunch, it will be off to grocery shopping for some goodies at the nearby Chinese grocery store.

Thank you all – every one of you – you have all played a major role in this story. Whether you made a donation, are keeping them in your thoughts and prayers, or have helped in some way to get them here, we couldn’t have done it without you!