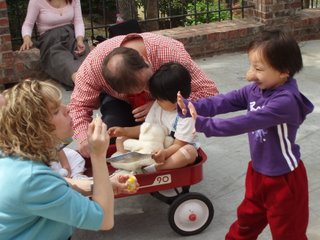 I arrived in Little Rock yesterday after lunch and immediately got to go over to the foster parents’ home to meet Gong Lu. I have been thinking about her ever since that meeting. I was trying to think about the exact right words to describe her spirit, but then I decided it would be like trying to describe a sunset with only simple words or trying to describe standing on the shore of an ocean. You just have to BE THERE to fully understand the depth of it, and so nothing I could ever write would do justice to this little girl who can capture your heart within minutes. 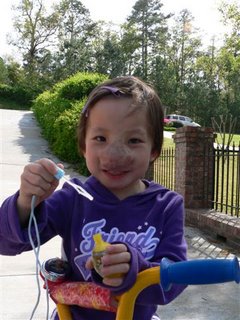 that she is a master bike rider who does NOT want to follow the helmet safety rules despite everyone’s insistence :-), that she can shoot hoops like a pro (she was three for three when she was playing with me), and that the smallest of things bring the hugest of giggles. We had brought her some very small presents, and one of them was a bubble necklace that she immediately wanted to try. When the first burst of bubbles came out of the wand, she clapped her hands with glee and her smile just lit up her face. Within two minutes she was a bubble blowing pro, and then quickly mastered blowing bubbles and then CATCHING them on the wand.

While the Today Show interviewed the extremely kind foster family, I took Gong Lu and the rest of the kids downstairs to the playroom, and for the next hour we had an absolute blast getting to know each other. Earlier in the day, she had announced to everyone that her dreams for the future included getting “this thing” off her nose, finding a family, growing up, getting married, and definitely becoming a doctor who could heal other kids. Well, Lu found a pretend doctor’s kit on a shelf and proceeded to show me that she knows every single thing a doctor does. She insisted I lay down on the floor and then she took my blood pressure, checked my heart, and even gave me a shot. After each check, she would say “hao de, hao de”, (good, good) like she was very impressed with the results. 🙂 Next it was the two year old’s turn, and she got a long pre-exam explanation all in Chinese, and I assumed Lu was telling her “this won’t hurt a bit”. Her second patient also got a clean bill of health. We then began playing a rousing game of hide and seek, made all the more funny by the fact that Lu chose the same place to hide each time and was giggling so loudly that she quickly gave away her location. At one point, she accidentally closed her finger in the closet door, and she tried very hard to be brave while a dark blister began forming on her pinky. Without thinking, I kissed her pinky and she gave me a look like she had never seen that done before, but she decided it wasn’t so bad, so for the rest of the night, every time I saw her she presented her pinky to me for a “get well” kiss.

The funniest part of the day was when we took a walk on the beautiful golf course behind their house. It was evening and so I didn’t think anyone would be out golfing. We walked down to a cool stream and she learned how to throw stones in the water, and then we were 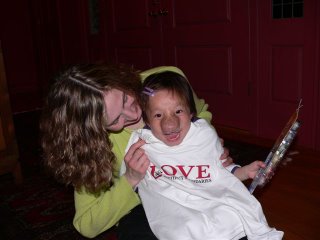 coming back on the fairway when someone yelled “FORE!”. The ball came flying right in front of all of the kids, and suddenly I saw Lu go running out to grab the ball, and then she took off running down the course! The golfer was yelling “Stop! Stop!” and I was laughing so hard as I took off after her. She did NOT want to give up that nice ball that someone so conveniently had hit her way. She definitely improved their lie! 🙂

The foster parents had a wonderful dinner for many of the people who had helped make Lu’s visit to the US possible, and all too soon it was time for her to go to bed. She had a very big day coming, and had to be at the hospital at 5:30 a.m. 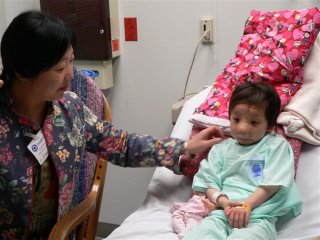 morning (after the alarms Karen and I set did NOT go off…oops), we hurried to the hospital within minutes of waking up. We got there just as they were taking Lu’s blood, and she was so very sad. After it was over, I walked over to the bed to rub her leg and she must have recognized me as the “pinky lady”, because she held up her arm where they had drawn the blood for me to kiss. Isn’t it amazing how that works with kids? 🙂

One of the wonderful things about Lu’s surgery was that the anesthesiologists from the cleft mission had found out about Lu being helped by LWB and so they signed up to do her anesthesia. One of the cleft team nurses was there as well. So it was such a happy reunion in the hallway before surgery, and we all got goosebumps thinking how this whole story had unfolded and brought us all together once again. I knew Lu was in the absolute BEST of hands.

Karen and I were allowed to gown up and go into the OR to watch the entire surgery. We were so very grateful to be able to have this opportunity to be there, and it was nothing 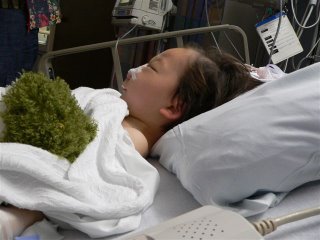 short of miraculous to watch Dr. Buckmiller’s incredible skills as she removed the tumor. It took her almost two hours to fully release it, and then several more to sculpt and create a new nose for Gong Lu. Dr. Buckmiller not only has a heart of gold and is a wonderful person and doctor, but she is also an artist, as we watched her meticulous methods to get Lu’s nose as close to perfect as possible. After over 5 hours in the OR, we all stood around Lu and many of us were crying at her beautiful new face, that now matched the beauty of her spirit. I know we say it over and over, but every child we can touch IS a complete blessing……and as I stood by the operating table and stared at Lu’s new nose, I was filled with such an incredible feeling of happiness and joy that this little girl was given this opportunity. I have no doubt that Gong Lu is destined for great things.

When we went up to her roo 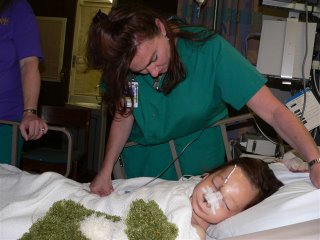 m after recovery, she was sound asleep and looked so peaceful. What a momentous day for such a wonderful little girl. She had waited five years for a new nose, and I am so thankful to every single person who helped make her wish come true.