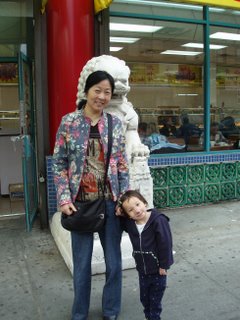 Gong Lu is in New York!

We arrived last night – Ms. Xu, Gong Lu, Linda (a translator) and me. We met at the hotel right after check-in and we were off on an adventure to find dinner. After grabbing a map, it was off to find the subway (by the way, none of us had ever been to New York before). With some help from some very friendly New Yorkers, we made our way to Chinatown. I can’t even begin to describe the look on Ms. Xu’s face when she started walking down the street, there was a huge grin – it reminded her so much of home! She was so animated and talking so fast. We soon came upon a restaurant that she like – 5 items for $4.00 and she said the food tasted like home (at China prices too). We had a great meal! Gong Lu, always the charmer, was busily chatting to everyone – she even gave us a little dance to the Chinese music playing in the restaurant.

This morning, we had a very elegant breakfast and once again, Gong Lu had us talking with many of the tables around – she is so social. Soon after breakfast, Dorie from NBC picked us up with a television crew. They were set to tape from the minute Gong Lu walked out of the hotel. Gong Lu is so used t 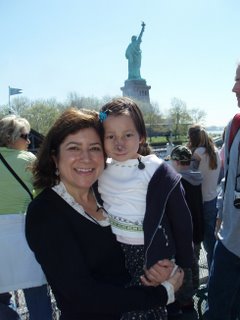 o the camera, she is quite the ham!

Our first stop was the Statue of Liberty. Because we had the film crew and were part of the Today Show, they had special passes that allowed us to get in front over everyone else. I felt so incredibly guilty – the line was blocks long and we just marched to the front. The film crew went on first and again taped Gong Lu strolling onto the boat. Our boat ride to the statue was filled with all kinds of animation – at the other boats, the birds, and the wake the boat was making. Everything is so new for her; it is just so fun to share in her excitement in everything. Because of the way we docked, the statue was on the other side of the boat. As we walked to the other side of the boat to see the Statue of Liberty, Gong Lu who was ahead of us start 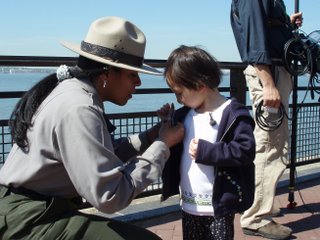 ed screaming “Ayi, ayi ayi”. She was SO excited and couldn’t wait to share her excitement with Ms. Xu. She was in awe of how large the statue is (as we all were).

We strolled around the statue and met up with the park ranger who was to be our guide. She made Gong Lu a Junior Park Ranger and took her hand to lead us on our tour. It was so much to learn so much about the construction of the statue – our guide was so wonderful! After our tour, she crowned Gong Lu with her own liberty hat. Gong Lu is just so much fun to tour with because her excitement is so infectious. I think that this was her favorite part of the day. 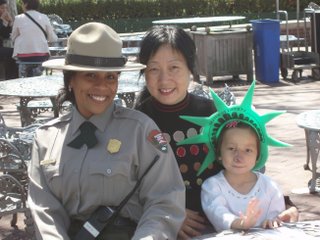 On the return boat ride, she sat with Dorie and me on a bench and showed us how she could use the cameras on our cell phones. I was floored! I was thinking I was so smart by turning off my cell phone and handing it to her. I thought that she would use it to just pretend to talk. The next thing I know, she is taking a picture. Again, I was thinking she was just pretending. Imagine my surprise when she turned my phone around and there was a picture there! This child, turned my phone on, turned the camera on and knew how to take a picture. Next, she showed Dorie how to use her phone’s camera too. Our phones are two different brands and the buttons were in different places, how she figured this out was beyond either of us. This kept her busy for almost the whole return ride. We lots of close ups!

Our next stop was lunch. We decided for convenience and comfort of Ms. Xu and Gong Lu to go to Chinatown again. The Hop Kee restaurant was suggested to us by our driver. Ms. Xu had a Chinese version of a menu to order from and soon our table was filled with many great choices. I think she and Gong Lu really enjoyed their lunch – Gong Lu ate 4 helpings of a fish soup that was their specialty. Again, traveling with a celebrity, Gong Lu had everyone talking. When the restaurant owner heard why we were there – he wanted pictures of Dorie and Gong Lu to put on his famous wall with Bill Cosby and Conan O’Brien – Dorie worked for NBC Today Show and that was good enough for him! Gong Lu was quite the ham as always.

After lunch, we went to Ground Zero. There is nothing I can say – it was so unbelievable. I focused on the cross of scaffolding that was left that they have now mounted and prayed for all the families and loved ones lost. 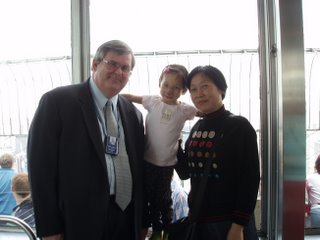 The last stop on our scheduled tour was the Empire State Building. Because of the TV crew, we once again had our own escort and private tour. The head of security, a tall man and a retired police officer, was our guide. Gong Lu was really taken by his authority and how he told people what to do. She was quite animated telling him that he was just like Ms. Xu who was in charge of her orphanage. Hand-in-hand, they lead our tour. It amazed me how quickly she had this big man wrapped around her finger – another person in love with this sweet little girl. What beautiful vie 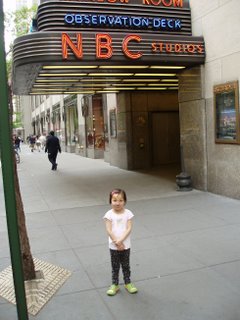 ws we had of the whole sky line. Gong Lu chatted and chatted about what she saw.

Once we were done with our tour, we dropped Dorie off at the NBC building so that she could edit the last tapes into tomorrow’s show and we went to see the bull on Wall Street. After quick pictures, we went back to our hotel. Ms. Xu, Gong Lu, and I decided to take a walking tour of Central Park located right across the street from our hotel. What a beautiful park. Without a translator, Ms. Xu and I communicated with my limited Chinese language and gesturing. We were able to go see the beautiful flowers she showed me by picture that she wanted to see. Tulips and azaleas were in full bloom and we had a wonderful stroll, taking many pictures along the way. Unfortunately, we were too late for the carousel that I hoped to take Gong Lu on, but it was a beautiful walk. 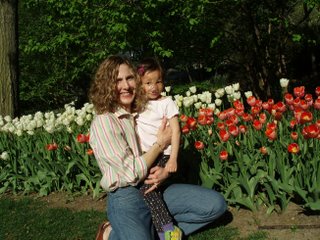 I settled Ms. Xu and Gong Lu into the hotel. Ms. Xu wanted to get Gong Lu something to eat and tucked in for an early night. Dr. Buckmiller and her husband arrived this evening and I was able to visit with her for a while tonight. She is the most incredible surgeon and such a kind per 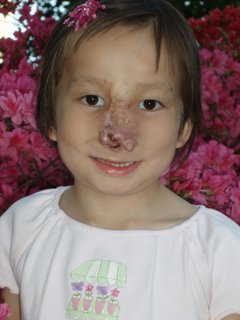 son, I feel like she is an old friend.

The show should be on around 8:40 according to Dorie and Katie Couric will be our interviewer. Before the live segment, there will be a 4-5 minute segment taped in Arkansas and from today’s tour. I know that Gong Lu will steal the show and everyone will see the lovely child we all do.