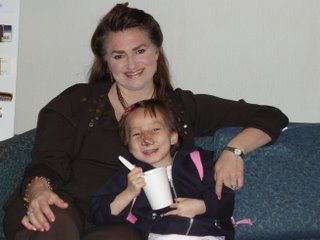 Well the day finally arrived. Can you say NERVOUS? I think this is the category that everyone fit in except the star – Gong Lu.

The morning started out with a drive to the studio. We all fit into a SUV and had a great driver. Unfortunately we were stuck in traffic for a while, but we were really early, so it didn’t matter. There was a big truck stuck in the intersection a block down and no cars could move. We must have just sat for about 10 minutes. We kept asking the driver if we could just walk and he said “No No” he would take us there. Imagine our surprise when the driver pulls up 4 car lengths, pulls over and lets us out. We are all laughing. 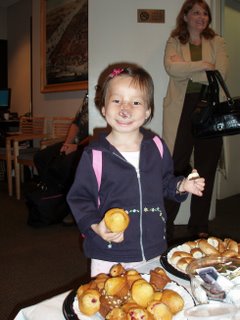 were led in a back entrance and up some stairs to the “Green Room”. The Green Room actually had no green at all, but just nice white walls and couches. On the wall were huge posters of all the morning televisions stars. There were plates of vegetables, fruits and muffins. I am wondering who actually eats it, because everyone sitting in that room was nervous. Well, I forgot, Gong Lu had a nice snack. 🙂 We all were called individually into the hair and make-up room for a touch up. Gong Lu, with her natural beauty, required nothing. While we were sitting and waiting, Hoda Kotb came in and sat down with us for a while. She was so sweet and was so interested in Gong Lu.

Soon, we were told it was time, so we were led downstairs to the studio. They were filming outside, so we they put our mikes on and led to our seats. I was in awe of the HUGE posters they had of Gong Lu behind the chairs. Gong Lu just stared at her pictures and was talking animatedly about them. She loved seeing herself! We had a little time to meet Katie Couric and for her to let us know what she was going to do. She is SO nice! Just as sweet in person as she seems. Gong Lu worked her charms on Katie too and soon we were rearranging seats so that Gong Lu could sit on Katie’s lap. 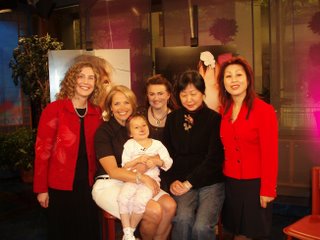 When it was our turn to talk it seemed like it went so fast. I just loved the faces that Gong Lu made as Katie was tickling her chin – it was priceless. After it was over, Katie stayed around and took pictures with all of us. Did I say how genuinely nice she was?

We waited outside the studio and met a few more people. A few of the other producers came down to say how much they loved the story and how everyone was crying. There was a lovely producer named Celia, who is Chinese, who came over to meet Gong Lu and Ms. Xu. They had a wonderful conversation in Chinese. Celia left soon after to take Gong Lu and Ms. Xu out to get something for breakfast – they were so hungry.

I had one mission for the day – to have Katie and Matt sign a Love’s Journey book for the Art Auction. Katie promised m 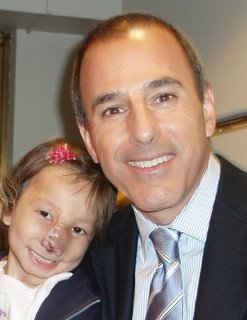 e she would; now we just had to find Matt. After they closed the show at 9:00 outside, they stayed to greet all of the people who came to see them. Matt came in first and was very happy to sign the book and take his picture with Gong Lu. While we were waiting, many people stopped to hear Gong Lu’s story and meet her – she was the star! After greeting people outside, Katie came returned to say good-bye to us. She also signed the book I brought and then I gave her a copy of Love’s Journey as a gift from Love Without Boundaries.

After all of our goodbyes, it was then back to the hotel to pack up, check out, and then off to the airport. As we got out of the van at the airport, a family immediately recognized the star – Gong Lu and took their pictures with her! I got to spend a little more time with them in the airport, but soon they were off to Austin, TX to another reunion planned by families who have adopted from Ms. Xu’s orphanage. Ms. Xu who only 3 weeks ago had never flown on a plane, now is a veteran flyer. I truly hope that she goes home with fond memories of her trip to America. 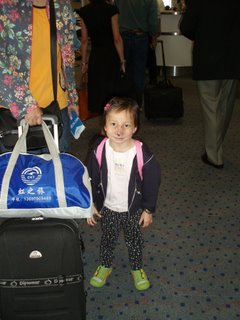 As I answered the phone and emails today from all of the people who were so touched by Gong Lu, I am so taken by the fact that so many people are considering Special Needs adoption because of this sweet child. She is truly an ambassador in so many different ways, but she has now helped to change the lives of so many more children. Gong Lu is a precious child, but there are so many others precious children waiting to be discovered too.