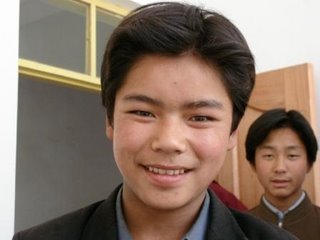 Early, on April 29th, we left Xining to drove appx three hours to visit the Xuri Poor Aid School, where we sponsor ten orphaned boys. The school is located on the bank of the Yellow River and has four classrooms. All of the boys look healthy and happy, but they were all so shy! One in particular was so shy that he could not make himself smile or look at the camera for the longest time. After much cajoling, we were finally able to snap his photo and captured his beautiful smile, then tried to show him the photo. He was so shy that he would not look at his photo in the camera. His dream is to go to college and become a doctor one day. 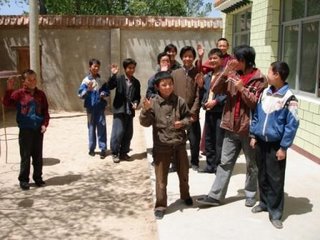 The school has five teachers, including three Tibetans and two Chinese. The Chinese teachers teach English and Chinese, and the Tibetan teachers (lamas) teach Tibetan, math, chemistry, and physics. Unfortunately, they don’t have a science lab at the school so they are only able to study science books. I wish we could have visited the boys longer, but we had another long day ahead so after a few hours we had to leave in order to get to the Jian Zha County School.

We enjoyed more dusty roads coupled with breathtaking views on our way to Jian Zha County. What happened when we arrived is unlike anything I have ever experienced, and made for one of the most memorable days of my life. As we rounded the corner to cross the bridge over the Yellow River, we were met on the bridge by the community leaders and a few of the 40 girls that we sponsor in this school. 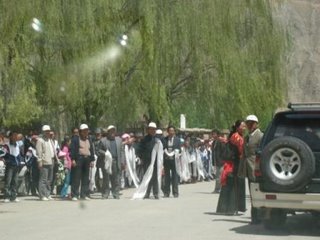 There are three traditional greetings for friends who come from far way in the Tibetan culture. First, they gave us the hadas. Then, they offered us a special Tibetan sweet wine with gold flakes. As one after another approached us and offered the wine, Nicole and I pretended to sip because we saw just how many people were lined up to offer the drink to us! 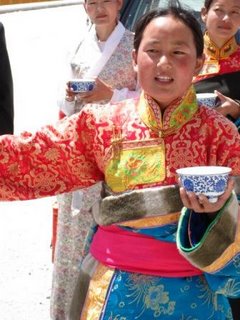 Finally, one of “our” girls sang to us. It was a traditional Tibetan song, but they had changed the words from “Mama’s Love” to “the love of Mama’s Wish.” Her voice was so clear and pure; it is beyond description.
Without a doubt she has the best voice I have ever heard in my life. Almost immediately I got goosebumps and began to cry. I had no idea what she was saying, but she had the voice of an angel and it was unlike anything I have ever heard before. I looked at Nicole and she also had tears streaming down her face. Then I looked at Jian Cuo, one of the Mama’s Wish teachers. He, too, had tears in his eyes and was trying to hide them with his camera and wiping them on his shirt. I wish so much that I could attach the sound of her voice and send it across the Internet. Even more, I wish everyone could come to hear her sing in person. 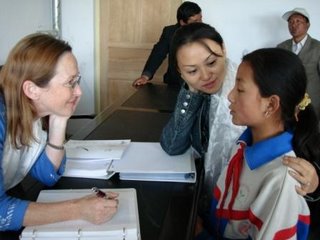 Still emotional from the warm greeting, we returned to our cars and drove on to the school. When we reached the school, we were met by all of the Mama’s Wish students and their families. One by one, each of the girls came up to us, bowed, and placed a hada around our necks. The girls were crying, saying in English, “nice to meet you,” “welcome to our school,” “thank you for coming,” etc. To finally look into their eyes after looking at their photos for so long was like greeting a family member I hadn’t seen in a long time.
Behind the students, were their family members. One by one we approached by a mother, or a grandfather, or an uncle, or a cousin, or sometimes someone from the girl’s village came to represent a family. These people with the most beautiful faces were so grateful. 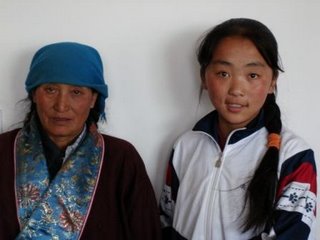 Imagine looking into the eyes of an orphan’s elderly grandmother who knows that her beloved granddaughter has a chance for a good future now because of the help that she is receiving. Can you imagine the eyes looking back at you? Can you imagine the depth of feeling behind those eyes? It was all so beautiful and moving, and at the same time I wanted to be able to tell them not to thank me because I’ve done nothing – it is the sponsors who are making the difference in these girls’ lives. I’ve known all along that I was coming to China and visiting these schools on behalf of LWB, but in those moments I realized that I am also representing the sponsors. I was receiving so much love and gratitude which I did not deserve. How I wish I could bottle up those moments and send them home to the sponsors.

We continued on into the school, where a traditional Tibetan feast was waiting for us.
After lunch the officials left, and we got down to business – which means the fun part of meeting the students. Each girl was more beautiful than the last, and each one has ambition. Most want to go to college to become teachers or doctors, and a few want to be policewomen, writers and singers. The girls all looked so beautiful in their traditional dress.
One girl began to cry – she was so overwhelmed that her parents had walked such a long way to see her at school and to thank us – her father is blind and the journey must have been a difficult one for him. We also handed out new clothes and supplies to the orphans in the program, and it was so fun to see their eyes light up as they looked at their new clothes, backpacks, toothbrushes, and soap. 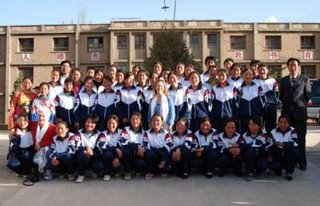 I did not want to leave this school and these children. They are inspiring, humbling, funny, brilliant, gorgeous girls and I hope that each and every one of them is able to reach all of their goals and make their dreams come true. Of the 40 students that we sponsor, only one was out of school that day because she was sick. We were told that she was very upset and wanted to come to school anyway, but she was just too sick to come.

Each day I have thought that there is no possible way that this trip can get any better. Tomorrow we shall see!