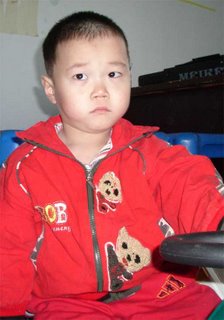 When I traveled with LWB volunteers to a Hunan orphanage, we met a little boy in a red shirt I’ll call “Q”. He was very sly and every time we tried to take his photo, he pretended to instantly be fast asleep and snoring. Even when we tried to tickle him and pick him up, he stayed “asleep.” After we were there an hour or so, he finally gave up this game and with a long face, let us take this photo. He has a club foot, club hands, no knees and weak limbs, overall. We saw that he moved around the room by pushing a plastic chair in front of him as a walker. “Immediate need–pediatric walker,” was hastily written in our notes.

I wasn’t sure how to get Q a walker. I contacted a yahoogroup of parents that have already adopted from there. The group set about purchasing one for July delivery. A few e-mails flew back and forth between us as to acquire the walker when Amy Eldridge let us know that had a pediatric walker sitting in a box in her foyer…where could she send it? 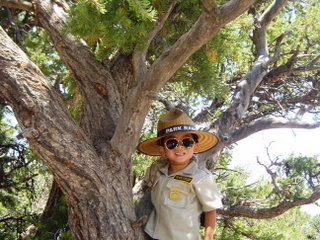 The walker is from a mom of a special needs boy, Kevin, you see in the photos accompanying this entry, I sent her an e-mail of thanks. Her response sent tangles spinning into loops of love around some special China boys. She elegantly tells the rest of the story: 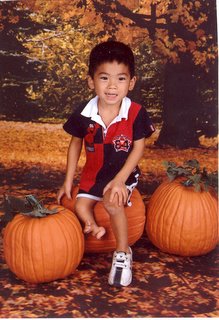 “Having a son with a limb difference, I have a real burden for the little ones in the same boat. The walker we donated to LWB was Kevin’s. He hardly ever used it. He has a prosthetic leg now and runs with the wind. If he ever needs one, I have resources to get him another. I’d rather give a child a chance to get around independently than leaving it in the garage for what might happen. In the school picture you can see his original “little foot”. In the others you see him after. Maybe you can use them to educate people about the possibilities. Kevin swims, plays tennis and enjoys karate. Funny thing, when I started the special needs process, I was looking for a child with a very minor need…one that could be easily fixed and not seen. I am single and I didn’t think I could handle more. But when I saw Kevin’s picture, I could not turn away from that face. I educated myself, faced my fears and moved forward. I learned from adult amputee athletes and another single mom who adopted from Russia with a similar situation. My resolution to bring Kevin home grew. I had to buck a lot of naysayers. However, when I returned home with this Chinese version of Billy Crystal, everybody knew I had the correct son. I tell people that I shutter to think what I would have missed if I had let fear rule my decision. Kevin has opened an entirely new world to our family. I am active with the pediatric amputee network. I’ve met families with children who have limb differences and am comfortable with them. 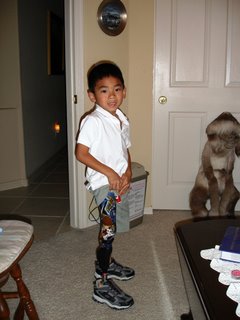 There is a boy in Kevin’s orphanage who will never get adopted. “T”, used to look out for Kevin like a big brother there. When I saw T and Kevin dragging themselves around on adult walkers, I vowed to help get pediatric walkers and crutches to China. I looked for the best pediatric crutches I could find and have sent forearm crutches back to T and he was able to go to school. I have a picture of him smiling with his school certificate … he was top in his class. Right now there is a new pair of navy blue crutches, donated by the company that makes them, waiting to go to him. The company donated them and shipped them to me and a family will take them to him (along with a pencil case chockfull of goodies for school as a reward for doing so well) in September.
I’m asked why I send crutches. I guess I want this little boy to know that there is someone who cares for him and who wants to send him the best.
It would please me to no end, if our story could help bring another child to a home. One of my favorite moments of this whole experience is when I sent photos of Kevin back to his orphanage. The assistant director wrote back to me, ‘Kevin doesn’t look like disabled child anymore.’ “
After reading Kyle’s message, full of love and hope for not only her son, but for Q and T both living in orphanages in China, I knew beyond a doubt that greater forces were at work here than a few volunteers searching for a pediatric walker.