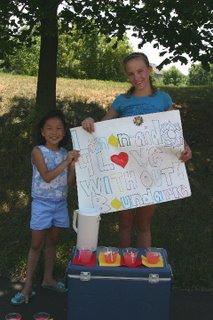 Cure for the Summertime Blues
From a LWB Donor…
As I returned home from a routine school physical with one daughter, I found that my other 13 year old daughter, Kathryn and her cousin, Lucy had left me a note saying that they had gone off to sell lemonade. After I wiped sticky stuff off the floor and picked up the rest of the mess they left in the kitchen, I headed out to find their stand.
I first ran into Lucy (age 7) who informed me that they had already made $27 because one guy with a lot of kids gave them $20. This seemed strange to me that they could make so much money so quickly. Something was not right. I then continued off to find Kathryn to make sure she wasn’t fleecing the neighbors. I was quickly corrected that the guy with “a lot of kids” had twin boys from Korea and he was more then happy to donate to Love Without Boundaries.
These 2 girls had decided all on their own to open the stand with the intent of sending the money to LWB for the Cleft Mission trip this October. 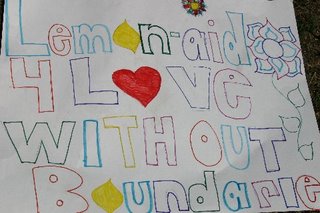 Their goal is to earn enough money so that they can sponsor one orphan’s surgery. So far they have made $50. The “Lemonaid” stand will contiune throughout the weekend. Fortunately for them the forecast is for hot dry weather! Editors Note: The girls earned $98 that weekend.