MUSIC CAMP AT LUOYANG
We arrived at Luoyang with great anticipation for an exciting week ahead at the music camp in the orphanage. Our team is made up of 6 females, including a local, Priscilla, who coincidentally is the professional musician among us. 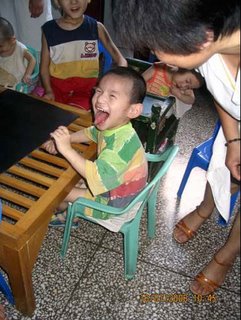 We were greeted warmly at the airport by staff from the orphanage including Chairman Pei who is the head of the orphanage. After a brief tour of the orphanage, many of us were filled with mixed emotions. Yet something about the smiles of the children and the love of the “aunties” who ran the place reached right out to our hearts and made us feel at home. 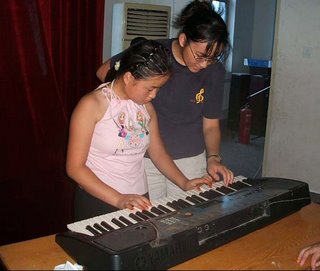 We started the mornings with each of us conducting classes for selected individuals in the different instruments like guitar, piano, keyboard, violin and clarinet. All of us were amazed by the talent displayed by all our students, the level of concentration they had and their enthusiasm in picking up the instruments. While some of them have had experience learning musical instruments at some point, most of their prior lessons were usually given on an ad-hoc basis and were often haphazard and without systematic teaching. Yet, their brimming eagerness to learn made it such a tremendous joy to teach all of them. 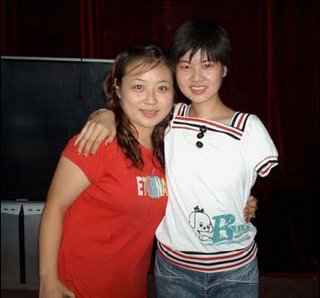 One of the teammates, Priscilla, taught piano to a blind boy called Gang-gang and another girl, Xiao-jing, who has only 1 arm. Both of them had very little prior experience in playing the piano. Nevertheless, at the end of the week, they were able to play a duet together, with Gang-gang playing chords and Xiao-jing playing the melody. It was a very touching scene as both worked hand-in-hand to play a “3-hands duet” of familiar classical tunes. In the afternoon, we had group activities that included more orphans of a wider age-range, from 7 all the way to 18 year olds. 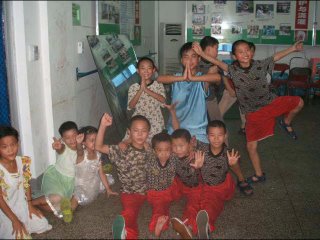 On the first day, Priscilla gave a quick overview of basic theory on reading musical notes and learning rhythm. We followed up by a fun time of singing songs with accompanying actions like“Edelweiss” and “Do-Re-Me”. On another afternoon, we conducted dance classes for both boys and girls and group singing sessions. These afternoon group activities gave us more opportunities to meet the younger children who did not attend the morning instrument classes which were mainly for older children. Once again, the children amazed us with their spontaneity and liveliness as they responded enthusiastically to all the games and activities. In the middle of the week, we had a chance to go on a day-trip to a local attraction with the kids, organized by the orphanage. The children could barely contain their excitement as they started snapping pictures with our cameras. It was during this day that many of bonded personally with the children as many of them opened up and shared more with us during this day. For example, a very adorable girl, Sarah-Abby (who doesn’t mind being called Sarah or Abby), shared with one of our team members, Mindy, about the dreams that she has and about other little facets of her life. Priscilla also had a heart-to-heart talk with Xiao-jing about her plans for her future. Many of us got to know the children at a more personal level throughout this day. During the lunchtime at a restaurant that day, the children were surprisingly very well behaved. Instead of fighting over the food like how most children were expected to, they waited patiently for the food to be passed to them and served food to one another and to us. It was definitely a very beautiful day as we witness how the children genuinely cared for people around them. 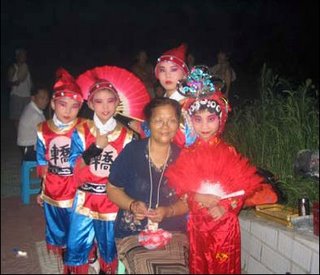 During the week, the children held an out-door concert in a nearby village. Most aspects of the show were done by the orphans themselves. The older boys spent many hours setting up the stage, which was professionally done with lightings, sound systems and a PowerPoint display. Many of the performers did their own hair and make-up. I was especially struck by an older orphan, Cui-nan who was like the big brother in the orphanage. 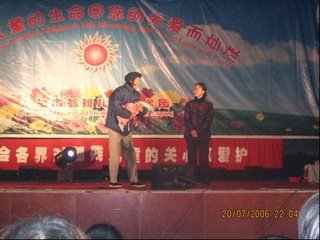 He was helping set up the stage under the scorching sun in the afternoon and the next moment, he was up on stage playing the drums in the brass band during the performance. The performance that night displayed the numerous talents that all these children possess. There was opera singing, an wu-shu display, brass band performance, singing and dancing from various groups of different age-ranges. One of the most touching and poignant performance was a play about a father who rescued an abandoned baby and took him home to raise the child despite his wife’s opposition. The message delivered by the play was clear: that all children is precious and should be loved and cared for. The play was acted by Cui-nan and the other orphans, hopefully the message will be taken to heart by the villagers who came for the performance. 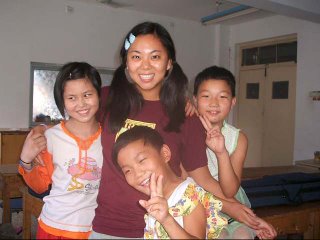 On our final day at the orphanage, the children put up a farewell performance. It was a very touching moment for many of us as we gave out gifts to the children and personalized cards to children whom we have developed deeper relationships with. We parted the children with tears and promises to keep in touch, encouraging them to have confidence to pursue their dreams. 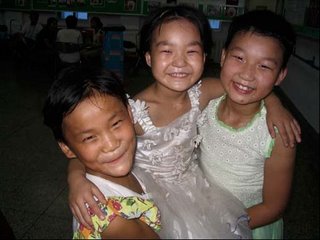 The most striking characteristic of theLuoyang orphanage is the overall love that fills the place. This love is very apparent, from the people who work tirelessly in taking care of the orphans to the orphans who treated one another as siblings in a big family. Many of the older orphans were responsible for the chores and looked after the younger ones, while the younger ones respected the elder children. There was no hint of bitterness at what the hand of fate had dealt them, only gratefulness for the simple joys in life. Most of us left feeling we had not given much to the children, yet we had gain so much from them. Written by one of native Chinese LWB Music Camp Volunteers 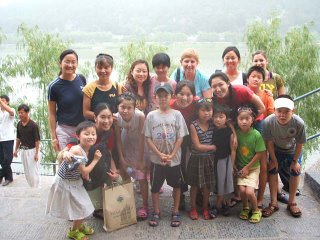