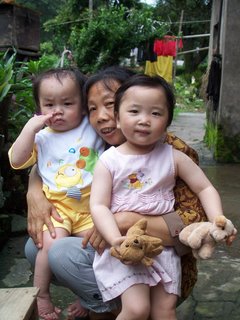 Straight Feet for Bang and Juan

Back in April, Love Without Boundaries was sent the files on two beautiful children — a little boy and a little girl. Previously, both children had club feet surgery, but both of their feet still were curved. Now at age two, both children had a hard time walking. We were asked if we could help fix their feet.

Right away, we thought that we needed to find a hospital that would perform surgery on their feet given their age and previous surgeries. Even though we had been sending our infants with cl 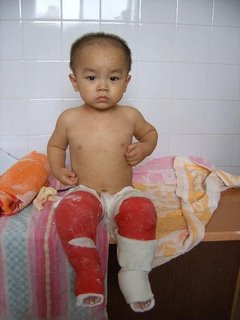 ub feet to a foster home in Beijing for casting, we didn’t think that casting could help these children at age two. These two children were added to the website, hoping we could find them a sponsor and send them for their surgeries.

By chance, a foster home in Guilin happened to be looking at our website. Out of the blue they emailed us and told us that they could do club feet casting too! How amazing that someone else in China knew how to use the Ponseti casting method. Better yet, they had success with children who had previously had a surgery. After emailing them close-ups of our children’s feet, they emailed excitedly saying that they thought they could help!!

Next the process of arranging a tempor 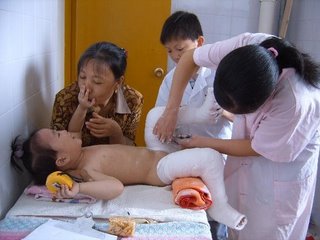 ary foster home and making the arrangements for the transfer between the orphanage and the foster home began. Finally, by the beginning of June, the children were moved and settled into their new homes.

Soon after they were settled, casting was started. Every few weeks, old casts were cut off, new casts were put on, and their feet were slowly straightened. With 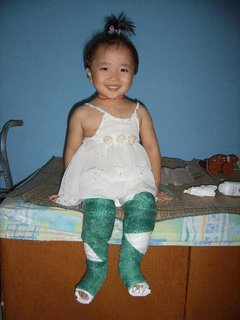 these active toddlers, the casts were made of fiberglass. Without the fiberglass, their cast wouldn’t even last a week.

Because of their previous surgery, neither child required a tendon lengthening or tendon transfer surgery that is required in many older children.

Three months later, these two adorable children have totally straight feet!! All they will need now is bracing and their feet will be straight forever. That is not all, we have heard from the orphanage that both of these children are soon to be adopted. 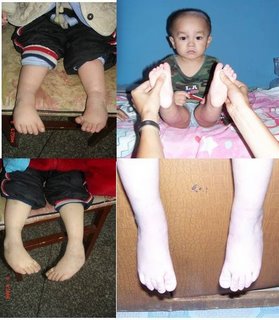 Look at their feet!!! Soon they will be running and playing.

Waiting, are four more children with club feet. Arrangements are being made and soon they will have their turn too.

Thank you for helping us to make a difference!
Karen Maunu
Medical Director