We know that Nick can be a bit fussy sometimes, and maybe even a little bit stubborn. Usually, once he starts crying, it is very difficult to make him stop…but his nannies seem to have unlocked his fussiness, at least a little bit.

Our house manager, Zhang Ming, tells us that Nick’s mum is now able to calm him down by holding him upright, snuggling him into her chest, and letting him listen to her heart beating. She says that this method is very effective and that he just “wants the feeling of staying inside mum’s body, a feeling of being bundled or a feeling of safety maybe.” Often times, the nannies bundle him up in a wrapper and carry him around with them as they care for the other babies; they say he appears very relaxed as long as he is in the arms of his nannies. 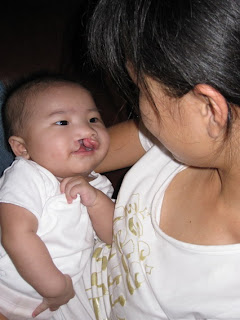 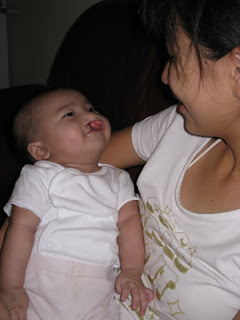 Nick gets some quality one-on-one time, cuddled up close. 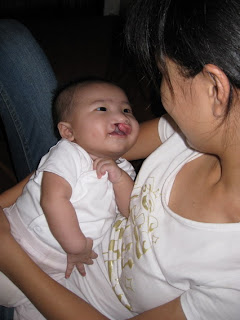 There’s no doubt that each and every one of these babies longs to be held, cuddled, and loved–a kind of bonding they were unable to do with their biological parents, but something that we are able to provide in the cleft home, thanks to your generous support.