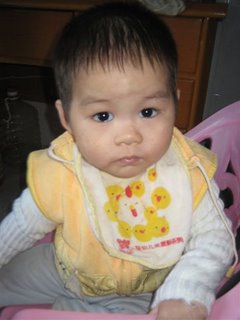 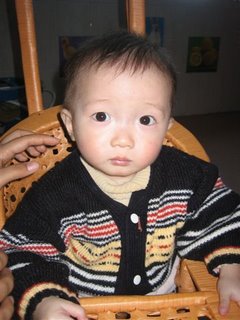 I always know I have had a good day in Shantou when I stumble back to my hotel room covered in spit up, potty and lots of hugs. And today was no exception! We headed to the orphanage early and I asked my friends if I could please stop at a local market to buy some pork jerky for the kids as I did not have time last night to run to Walmart to get snacks. Children in Shantou normally see “Ayi Amy” and immediately think “the lady with lots of food”. There was no way I wanted to go there empty handed. We stopped at a local stall and quickly ran up to purchase some treats. Basically I just bought all the jerky they had in one HUGE bag. Then we headed to the orphanage.

When we arrived, the younger school children were all sitting outside having an English lesson. Oh how I love these kids that I have followed since they were tiny babies! I always wonder if they will still remember me when I come back, but sweet Long quickly put 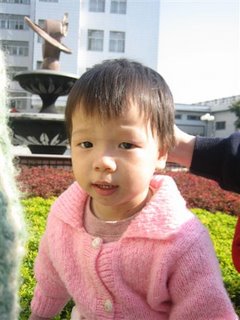 my mind at ease when he opened his arms to be held. These kids are just so much fun. Lan smiles non stop and is SO 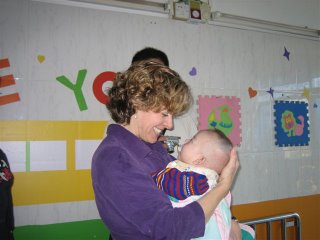 tiny and petite. When the teachers brought out some Kix, she kept trying to hold as many as possible in her hands but her hands are just so little! The teachers took a tambourine and turned it upside down and asked one little boy to be the “helper” to pass out the treat and I have to say all the kids did very well waiting patiently for their turn. After we had a very nice time visiting with the kids outside in the warm sunshine, we all went inside so they could show me their singing and dancing. The teachers were very excited for me to see what they had learned, but unfortunately by
then they had spied the toys I had brought, as well as the bag of balloons, so all thoughts of class went out the window. Min, one of the babies we did heart surgery for last year, was just so funny. There was one toy I had brought that had smiley face flowers that lit up and made noise when you pushed them. All the kids wanted to see it but Min tucked it into her arms and ran away as fast as possible. She would play the music while keeping one eye on the lookout for anyone coming too close, and if any child got within 10 feet of her toy, she would run again. She made my day by walking straight into my arms to be held. She is so lovely. 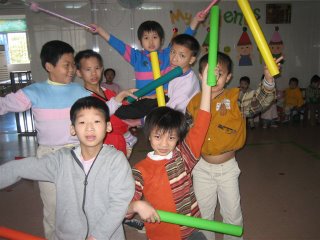 The older school kids then came in and after saying hello to them all, they did two musical numbers for me. The first was a karate number and it was so much fun to watch these kids be so serious and intent in their ‘HIYAS!” The second song was done with plastic tubes that they beat together as percussion instruments. At the end, they all posed and two boys lifted Qi into the air for a grand finale! It was spectacularly done. Just a few years ago none of these kids had any sort of education, and now their day is filled with music and learning. I got to watch them using the Montessori materials, and they were so intent in learning how to zip, button, and snap. It was just great to be with them. I am so excited about the possibility of opening even more “Believe in Me” schools in 2007.

I also spent time in our PT room that we helped build in 2004. There are 3 physical therapists 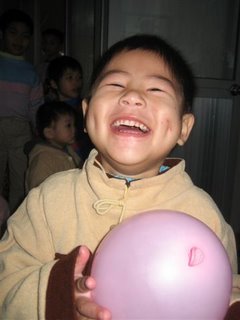 now who work with the kids every single day. The kids have made great progress, and the staff is very happy. Some of the kids had such weak legs before they started PT and now they can stand and walk. The PTs are all so young and kind and seem to have a really great relationship with all the children they are caring for.

Then it was time to check on all the medical kids that LWB has been involved with in 2005 and 2006. Ummmm……I’ll just say this list was a little long. When I first showed it to the woman helping me her eyes got really big! But we worked out a system where we started on the third floor and worked our way down and it went much quicker than I thought. The heart babies who went to Shanghai recently look incredible. Their color is good, their appetite is great, and I know when they finally hit an adoption list they will be chosen in a nanosecond. I am just so happy we can help in this way. I know many of you remember baby Yi, who had such a severe heart condition. Well there is a new baby boy who we did heart surgery for in November who looks very similar to her. Yi’s aunty, who still misses her SO much, has now made it her mission to nurse En completely back to health. Oh he is getting so spoiled! It is so fun to see her with yet another heart baby to love.

One of the babies we had helped, little He who had a large neck tumor, was actually domestically adopted by the surgeon! Isn’t that great? I have always liked that this orphanage does so many domestic adoptions. Even the director and vice director of the orphanage are adoptive parents themselves. 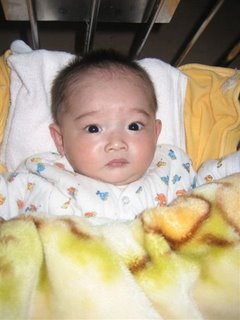 I was laughing, however, at my pitiful mastery of the Chinese tones as I really needed to photograph baby Hao (third tone) and I guess I said baby Hao (fourth tone), so they took me to a crib and I oohed and aahed and held this little baby for so long saying, “I know your momma, and she will come soon to get you”, and then I finally said, “what a cute girl” and they said “THIS IS A BOY”. Ha ha…..wrong baby. So back up to the third floor we went to find the lovely Hao (third tone) who will hopefully have a family very soon.

There is one little girl with albinism here who was recently on an adoption list. I still don’t know if she found a family or not but oh she is SO loving. Every time I come she wants to be held and never put down. Well, today was no different, and when I went into her room they were all eating lunch. The nutrition program in Shantou is so great as it allows 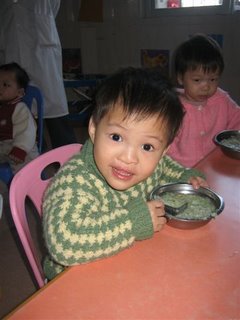 the kids to have these huge bowls of seafood congee and vegetables, and all the kids were just eating so much but then Qin saw me and ran over wanting to be held. I decided to sit on the floor to cuddle with her and the moment she sat on my lap I thought “uh oh” because two seconds after sitting down she decided to go potty, all over my lap. Ha ha…..By that time I figured I was already wet so what difference did it make? I knew I would be meeting government officials later but I honestly believe they just think American perfume smells like urine. J Oh the memories of holding kids here!

After playing a bit more, we finally headed out to look at possible sites for a healing center. I had visited two locations in Hefei and I think I went to about 8 in Shantou. Boy we moved fast. The funniest one was the first house which I absolutely fell in love with as it had flowering vines covering the whole outside. However, the woman showing 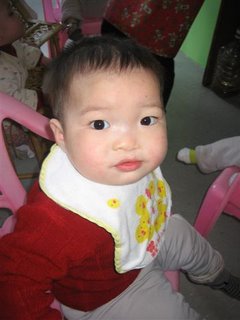 us the home didn’t realize that it had recently been rented on the first floor, so in I walk and I start taking pictures right and left of the house, when suddenly this man comes in and well….we left pretty quickly after that. I still love this house the most and am trying to figure out how we can convince the man he really would prefer living by the sea!

Each place that we visited got bigger and bigger in size, and I kept thinking “there is no way we could afford to own a six story building!”, but then the final place actually ended up being an entire senior citizen building that the government built and then recently closed when they consolidated SWIs. It was the size of a castle! We could house 10 foster homes in this one building. It certainly was peaceful however, as no one else lived anywhere near there and it was right by a small mountain and lots of trees in the back. We opened up one of the windows and all you could hear were crickets. But unless I win the Oklahoma lottery sometime soon (which is probably pretty doubtful since I don’t buy tickets), I am thinking this is a wee bit too much space. J

After visiting the possible sites, we all went for a dinner with Civil Affairs officials and I was 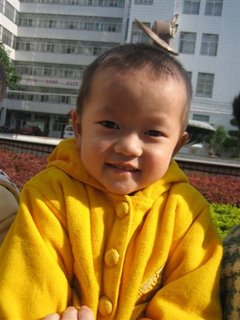 told that Shantou would be the ideal location for a healing center because it is warm year round (good for babies’ health) and because it is by the ocean (good for babies’ health) and because Shantou has the best seafood in China (good for everyone’s health!) We were all laughing by the end as each person added another “best” to the list. I sure have a lot to discuss with the LWB team back home.

We finally got back to the hotel very late and I am hoping I can get some sleep tonight. Last night someone decided to “ding dong ditch” my hotel room all night long, so at 3 a.m., 4 a.m., etc….someone ran my doorbell and by the time I got to the door they were gone. So please say a prayer that tonight whoever it was has moved on to another location!

Tomorrow I am going back to the orphanage to see the babies and toddlers, and then hopefully my friends and I 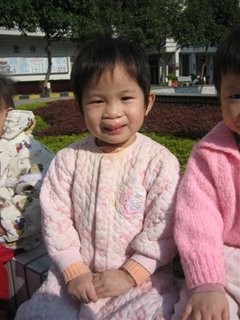 will take all the school kids out to lunch for hotpot. We are also going to go shopping for some new library books as a kind donor sent funds just for this purpose. Then it is off to Beijing again for a meeting with CCAA on Wednesday. 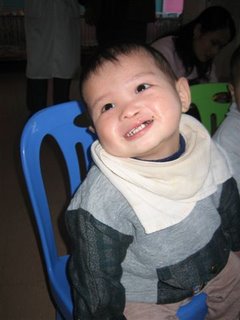